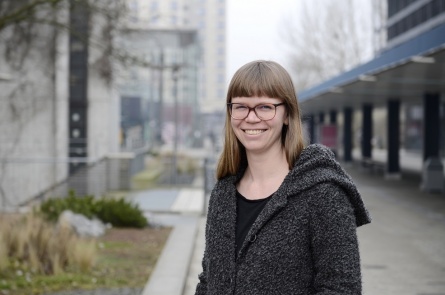 Dr Teresa Huhle
Teresa Huhle has searched Montevideo's libraries and archives to find out which international influences and relationships have influenced the development of Uruguay's health policy.

Teresa, you were on the road for your project in the spring. Where have you been exactly?

I was in Uruguay for eight weeks, more precisely in the capital Montevideo. My work on the Uruguay case study will take a total of four months of archival work - so this trip was the first half. But two years ago, before the CRC started, I had already been there and made my first explorations, so I was able to start right away this time.

Which archives did you look at?

I mainly worked in the National Library. There is also archive material there, but I mainly worked with old journals. There are also inheritances, old maps, photos ... But in the end I spent most of my time with journals.

Are these scientific journals?

Yes, scientific or government journals that are essential for my work on the development of health care in Uruguay. The Ministry of Health was founded there in 1932, but there had been two important government institutions before that: The Asistencia Pública Nacional and the Consejo Nacional de Higiene. Both institutions had their own journal, which I evaluate. Within the framework of the CRC, we are also investigating transnational influences on national social policy, and there is a lot about this in the journal. For example, it deals with conferences and exploratory trips by high-ranking representatives of these institutions.

What period are you looking at?

During this visit, I decided to take a look at the complete volumes of the journal of the Consejo Nacional de Higiene, i.e. 1906 to 1931, in order to understand how the institution had changed.

That's 26 years. How extensive are they?

The journal was published monthly, with a total of about 800 to 1,000 pages per year.

Were you able to browse through all of them?

In the beginning, I tested on the first volume whether it was possible and it turned out that I could actually look through the magazine completely in a decent amount of time. What was interesting for me, I photographed and made notes about it. To leave out the notes is fatal, because you end up with a few thousand photos on your computer and you don't know what they are. That's why I was relatively disciplined. I have bibliographed every photographed text directly and ideally wrote down three sentences about it.

What did you find in the 300 or so issues of the journal?

I looked for international influences and various international and transnational networks in which the actors and institutions were embedded and implemented when reforms were implemented. That is why, for example, I looked for all international conferences with Uruguayan participation. The material was very diverse. Sometimes it just says that someone from Uruguay was attending but other times there are long reports in which the Uruguayan delegate summarised and wrote exactly what he learned at the conference.

So these are certain input factors - do you also control the output? Like: Did these influences have any effect on policy?

My long-term goal is to be able to determine this selectively. At the moment I find it very difficult to distinguish between rhetoric and actual influence. There are currently not many places where I would commit myself to saying: "This conference, this trip to Europe or this visit to Argentina has ensured that Uruguay has introduced this particular law". This is not so easy methodically, but it would certainly be the next step.

How do you analyse your gathered material now?

At the moment, I am compiling what kind of connections, networks and forms of exchange existed. I also look at how the Uruguayan reformers reflected on their own actions, such as the assessment: "I was in Holland, I was shown the following, but that's not something we can do". But there is also the opposite verdict: "I think that is exactly what we have to implement now". Whether and how they then did that is another question, but it is nice to see that these international exchange processes are explicitly addressed in the sources.

Which countries and international organisations have had the greatest influence on Uruguay's health policy?

International congresses were very important, both in Europe and in the Americas.

Was Argentina a role model or was Uruguay an equal partner?

Geopolitically, Uruguay was the small buffer state between the two great powers Argentina and Brazil. But in exchange for health policy reforms, Uruguay was definitely at eye level.
Were there other countries that were important?
Yes, Brazil, and in Europe France played a special role, because there was a long tradition that Uruguayan doctors completed their training or parts of it in France.

It is surprising that it was not Spain ...

France was the great cultural role model for the Uruguayan elite, and in medicine in particular. As early as the middle of the 19th century, Uruguayan physicians - financed by the state - went to Paris. These doctors all knew French, as did the politicians. There are also medical books that were only published in French. That is quite remarkable. That's why France plays an important role in this health sector.

What else were important points on your trip?

There are other libraries that are important to me, but not well catalogued. So you have to know what you can find there and consult with the librarians. In order to get this information in advance, I contacted colleagues in Montevideo, especially from the history of medicine.

What happens now with your work and your entire project?

In 2019, all members of the project including the director Delia González de Reufels are on the road a lot and come back with a lot of material from archives and libraries as well as new ideas. We also have a new team member: Simon Gerards Iglesias, who is now going on archive trips. I am currently working on a lecture and will continue my research in the United States in August. In March 2020, I will travel to Uruguay again. This spring I still had the luxury to know: I will come back again. But next year things will get serious: I'll have to think about exactly what I'll need from there beforehand.