CRC 1342 introducing itself: Help to change 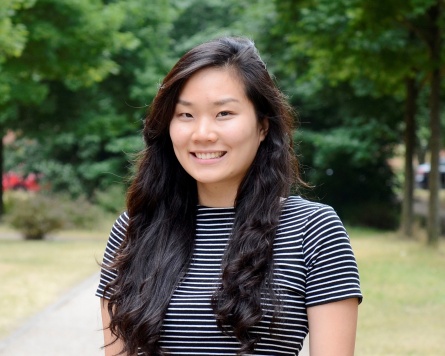 Keonhi Son
Keonhi Son is especially interested in social policies of emerging countries. In an interview she explains why the shortcomings of the South Korean social system are a major motivating factor for her.

You studied in South Korea and made a bachelor’s degree, but then you gave your career a complete turn-around. Please tell me about it.

I did my bachelor's degree in South Korea and then I started a totally new subject in a different country.

What was your first subject?

My first subject was English literature and I specialised in English theatre. I was quite into it at that time. But at one point I made another decision.

Why? Did you work in that field and did not like it?

I worked a bit for a theatre company and then I went to London to learn a bit more. Then I moved to Germany to study more. But I really didn't like theatre studies in Germany. That was when I realised that literature and theatre may not be the right thing for me. So I started to figure out what my second favourite subject was: public administrative studies or political science - in South Korea both are very mixed.

And that was what you made your master's degree in Heidelberg in.

Political or administrative science is very different to literature and theatre – what is it that you like about the subject so much?

First of all, studying political science was great fun. But secondly South Korea really needs to develop its social policy right now. Because we achieved economic development but the other factors didn't follow up yet. So I wanted to contribute to that. My parents and my relatives for example suffer from the absence of a well-established pension system. Somehow I was thinking: Maybe I can do something about it. Germany was a perfect place for me to study. Because it has quite a long history of social security systems.

I read that South Korea recently made some progress in terms of social policy: They reduced the weekly working hours - from 68 to 52!

Do South Koreans really work that much?

Yes, they do. It's a totally different mindset from European people. People back then had a very high level of job security and at the same time they thought they belonged to the company - they dedicated their life to their company. Even if the company exploited the people. But for a long time the people were okay with that and thought: This is the place I belong to. But now job security in South Korea is very low. Young people do not want to do long hours anymore: "Your are not going to hire me forever, so why should I work for you forever?" The reduction of the working hours is a good sign but at the same time it is sad. Because now job security is very low. Like anywhere else.

What would you like to achieve in your career in the next 30 to 40 years?

That is a very long time. I think in our generation we will have to change our jobs our jobs often. But I really want to be a researcher. I want to study social policy of less developed countries. So the CRC is the perfect project for me because I always wanted to study this subject especially in my region. I am not so sure if I want to BE or BECOME something in terms of career, but I am sure that I want to DO something.

Does that mean that you want to change the South Korean society?

I would like to help a bit. Change is too big a word. I am not that ambitious. I would like at least to provide a good model of social policy that might work. When Europe developed its welfare state, the constellation was completely different to the one we encounter in Soth Korea right now. It is a very different game now. We need to produce a new model of social policy. We can't just copy the European system. Working on the development of such a new system, that is what I want to do.

If you had anything you needed: enough research money, bright colleagues and all the necessary knowledge - which research question would you like to solve?

That is a very big question. I think it's quite similar to what I already told you. The less developed countries are in a situation that they have suffered from financial crisis, rapid globalisation, de-industrialisation, post-industrialisation and so on - with all of these things happening we should know how to develop our social policies, because we developed the social security systems way slower than our economy. And before the private insurance system will dominate the entire system, we should somehow find a way to provide a public social system.