"One-size-fits-all models can be vastly misleading" 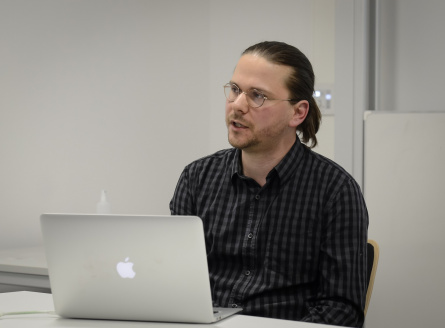 Dr. Jan Helmdag
Jan Helmdag from the Swedish Institute for Social Research is visiting the CRC 1342. During a lecture on statistical analyses of labour market reforms, he pointed out some pitfalls.

Dr. Jan Helmdag from the Swedish Institute for Social Research (SOFI) in Stockholm is currently visiting the CRC 1342. At SOFI, Jan Helmdag is working, among other things, on the Social Policy Indicators Database (SPIN), which contains institutional data on various dimensions of social welfare programmes. During his visit to Bremen, Helmdag gave a lecture as part of the Jour-fixe lecture series and contributed to a workshop of the CRC working group on cash benefits.

While the statistical analysis of all 255 studies together - Helmdag speaks here of a "one-size-fits-all" analysis - produced a relatively uniform picture ("There is robust evidence for classical partisanship", i.e. left-wing governments tended to increase spending and wage replacement rates, while right-wing governments tended to cut both), the country-specific analysis produced a fragmented picture:

In terms of spending levels, active labour market policy reforms are predominantly characterised by "new politics", passive labour market policy reforms are characterised by all three faces of partisanship: classical partisanship, reversed partisanship and new politics. Economic factors such as economic growth and unemployment rates had a major influence on the level of expenditure, but political institutions had not. All "faces of partisanship" were also evident in the level of wage replacement rates, whereby government constellations and "veto players" played a greater role than economic factors.

Helmdag concludes from his research that explanatory models based on one-size-fits-all analyses can be very misleading, especially when they refer to a long period of time. Country-specific analyses, on the other hand, offer valuable insights to improve the models.