"We wanted to combine the historical and political science approach" 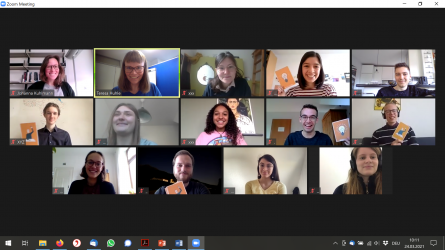 Teresa Huhle and Johanna Kuhlmann report in an interview on a 6-day seminar on social policy in the Global South that they led during the Spring Academy of the German Academic Scholarship Foundation.

CRC members Teresa Huhle and Johanna Kuhlmann led a working group at the Spring Academy of the German Academic Scholarship Foundation from 20 to 25 March 2021. Thirteen students from different disciplines took part in the six-day seminar on "Social Policy in the Global South - An Interdisciplinary Change of Perspectives". In the interview, Huhle and Kuhlmann tell us how the seminar turned out.

Who was entitled to take part in the academy?

Johanna Kuhlmann: Scholarship holders who are at the beginning of their studies were able to take part in the academy. We had 13 students from the first to the sixth semester.

Teresa Huhle: Access was not restricted to any discipline. So we had a diverse mix: about half came from the social sciences, plus a historian. The others studied law, economics, medicine, physics and philosophy.

How was your seminar designed?

Huhle: We had five main working days - after an introductory day, each day had a thematic focus: colonial social policy, international organisations, development policy as social policy and finally propaganda and behavioural policy. Day six was dedicated to a review and the preparation of a presentation for the joint concluding evening of the academy. In preparation, the participants had to read two to three texts per day. But we then varied the individual days and worked on the topics in very different formats.

Kuhlmann: Especially with regard to the digital format, we wanted to activate the participants. That worked well. Two examples: We held a plenary debate on social policy as development policy, in which the participants acted as different characters in a kind of role play. Another time we discussed a social policy measure in detail: What reasons and arguments can be put forward for or against the introduction of a certain programme and what does the decision ultimately depend on?

Huhle: On the day on propaganda, one text was about health films produced by Disney in the USA for Latin America in 1943/1944. We were able to watch one of the films together and discussed it afterwards. We paid attention to variety in the formats. This worked well - the students were all very motivated and wanted to work and discuss in groups.

What criteria did you use to select the texts that served as the basis for each day?

Kuhlmann: Because we wanted to combine the historical and political science approach, we had to find texts that spoke to each other - be it because they complement or also contradict each other. The accessibility of the texts was also important to us. We also had students from other disciplines in the seminar. But it was an unfounded concern that they might be overwhelmed.

In the seminar, you were concerned with a change of perspective - did that refer to the North-South perspective or to the disciplinary perspective?

Huhle: When we announced the programme, we were thinking more in terms of the disciplines. But we quickly realised that what attracted the students was not the social policy or historical perspective, but the category "Global South". All of them were interested in questions of global inequality, colonial structures and their legacy, and so on. Many had also been abroad for a longer period of time, including voluntary service. Fortunately, some of them said at the end that it was particularly interesting for them to get an insight into the way we work in history and political science.

You had participants from a range of different disciplines - from physics to philosophy to law - were they still able to speak to each other in a "common language"?

Kuhlmann: Yes, that worked surprisingly well. Most of the time we didn't even notice who was studying which subject.

Huhle: The physics student once asked us not to simply use special terms without explaining them. Otherwise there was no moment when the subject affiliation came up. That was certainly because everyone was very motivated and interested. But perhaps it also plays a role that the participants had finished school not long ago. They have just come out of a system in which it is completely natural to deal with very different topics.

What did you as seminar teachers learn from the course, what did you take home?

Kuhlmann: In the seminar, students from very different disciplines contributed thoughts from their perspectives. That particularly appealed to me: It made me think about issues not only from a historical or political science perspective, but also, for example, from an economic or legal perspective.

Huhle: The seminar was very intensive and provided a lot of food for thought for everyone. I would very much like to do it again. And quite pragmatically: It was a great exercise for online teaching, we could try out very different methods. Presence cannot be replaced, of course, but we still managed to create a group atmosphere during the week. I feel like I actually got to know 13 people over the course of the week. And I really like that.