"Our social system still needs a lot of reform." 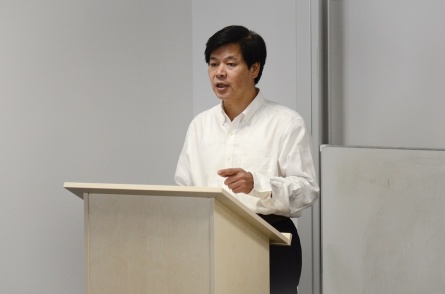 Prof Zheng Gongcheng
Zheng Gongcheng, professor at Renmin University and chairman of the Chinese Society for Social Security Research, presented his view on the transformation of China's social policy at SFB 1342.

Zheng Gongcheng, Professor at the School of Labour and Human Resources at Renmin University and Chairman of the Chinese Society for Social Security Research, visited CRC 1342 and gave an overview of the development of Chinese social policy, especially in the last 70 years. He also discussed the current challenges the Chinese Communist Party faces in reforming the social system.

Zheng pointed out that China has a long tradition of social security. There had already been disaster and bereavement aid more than 2000 years ago. The Han dynasty even operated a long-term care system for older people.

China's modern social policy, however, only began some 70 years ago. In 1949 there were eight million refugees due to natural disasters, for whom an emergency aid system was set up. At the same time, the unemployment rate in the cities was 50 percent. In 1951, unemployment insurance was introduced in China's cities, but not in the countryside, to prevent those affected from becoming impoverished. This distinction remained characteristic of China's social policy: health insurance and orphanage assistance, which were introduced in the 1950s, also remained limited to the cities. Moreover, social benefits were not borne by the central state, but by the companies the people worked for.

With the transition from the state-planned economy to the Chinese variant of capitalism, China's social policy also changed fundamentally. Social benefits are now at least partially financed by contributions, and the rural population is also included in the systems. According to Zheng, there are currently 1.4 billion Chinese registered in the social security systems. 1.35 billion people are covered by health insurance, 277 million currently receive pensions and around 5 percent of the total population receives social assistance.

"However, the system is still far from mature," said Zheng. "The goal of equality and justice has not yet been achieved". The financial basis of the social systems must be broadened and the pools from which the benefits are paid must be enlarged. At present, for example, health insurance is not yet pooled at national level, but at district level.

For pension insurance, nationwide financing is planned for 2021. The pension system, however, has the greatest need for reform in the areas of retirement age and minimum contribution period. Currently, Chinese women can receive their pension at the age of 50 and men at the age of 60 provided they have paid contributions for 15 years. It is obvious that the pension system cannot be financed sustainably with these figures.

But the necessary reforms are unpopular: in an online survey, 97 percent of employees in the public sector rejected a reform of the pension system. The Communist Party has already worked out the roadmap with the necessary reform steps and is unlikely to deviate from it. But, according to Zheng Gongcheng, the party has realized that it has to put in a lot of effort to convince the population of the necessary changes.

Looking to the future, Zheng also advocated the introduction of a private pension scheme to supplement the state pension. He also assessed the introduction of private primary schools as positive. Accident and unemployment insurance must be expanded. The biggest task, however, would be the introduction of long-term care insurance. China's population is ageing rapidly, and 60 percent of families have only one child. In many cases, it will not be possible in the future to care for elderly people in need of care in the families. China is therefore closely monitoring the long-term care systems in Germany and Japan in particular.

Zheng Gongcheng had come to Bremen with a number of colleagues from various social science research institutions. Following Zheng's lecture, the Chinese delegation met with the members of project B05 to discuss the pension, social assistance and health insurance reform in China in detail. SFB member Liu Tao also explained current developments in the German social security system to the Chinese guests.