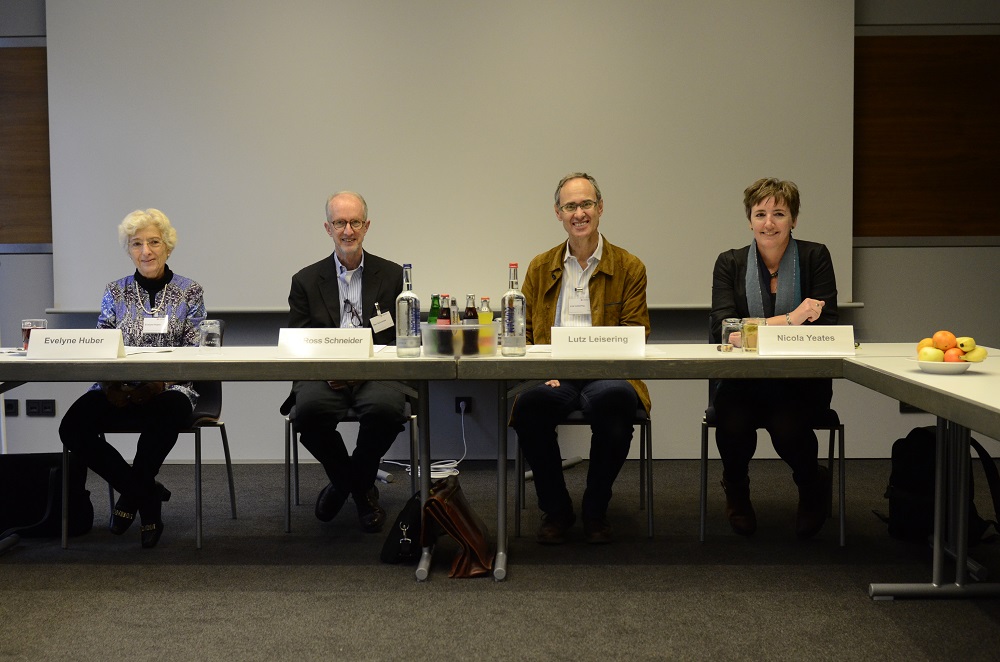 The members of the Scientific Advisory Board are:

Prof. Dr. Aaron Benavot
Benavot is Professor of Education at the University of Albany-SUNY, USA. His research focuses on global education policy and comparative education research. Among other things, he has contributed to numerous studies on the historical development of primary education in an international perspective and has examined the worldwide expansion of compulsory school education and the growing international influence on education policies. Benavot is the author of "Elite Knowledge for the Masses: The Origins and Spread of Mathematics and Science Education in National Curricula" (with David H. Kamens, 1991) in the American Journal of Education and co-editor of "PISA, Power, and Policy: The Emergence of Global Educational Governance" (with Julia Resnik and Javier Corrales, 2006). Prior to his professorship at the University of Albany-SUNY, he worked for many years as an "analyst" for the Education for All report of UNESCO.

Prof. Dr. Evelyne Huber
Evelyne Huber is Morehead Alumni Professor of Political Science at the University of North Carolina, Chapel Hill. She studied at the University of Zurich and received both her M.A. (1973) and Ph.D. (1977) from Yale University. She is the author of "The Politics of Workers’ Participation: The Peruvian Approach in Comparative Perspective" (1980); co-author of "Democratic Socialism in Jamaica" (with John D. Stephens, 1986); co-author of "Development and Crisis of the Welfare State" (with John D. Stephens, 2001); co-author of "Democracy and the Left: Social Policy and Inequality in Latin America" (with John. D. Stephens, 2012); co-winner of the Outstanding Book Award 1991-92 from the ASA Political Sociology Section, winner of the Best Book Award 2001 from the APSA Political Economy Section, and winner of the Outstanding Book Awards 2013 from the ASA Sociology of Development Section and the Political Economy of the World System Section. She received an Honorary Doctorate in the Social Sciences from the University of Bern in 2010, a Guggenheim Fellowship in 2010, and the Distinguished Teaching Award for Post-Baccalaureate Instruction from the University of North Carolina in 2004.

Prof. Dr. Lutz Leisering
Leisering is Professor of Social Policy at Bielefeld University. His research focuses on international comparative social policy, theory and history of the welfare state, old-age provision and global social policy. He is head of the DFG-funded interdisciplinary research group FLOOR: Financial Assistance (Social Cash Transfers), Land Policy and Global Social Rights. He is the author of "Social Citizenship for the Global Poor? The Worldwide Spread of Social Assistance" (with A. Barrientos, 2013) in the International Journal of Social Welfare and guest editor of "In Search of the 'Social': European and Global Perspectives on the Idea of the Welfare State", a special issue of the International Journal of Social Quality. His monograph at Oxford University Press on "Social Citizenship for the Global Poor? The Global Rise of Social Cash Transfers" is in preparation. Leisering was a Fellow of the Hanse-Wissenschaftskolleg in the academic year 2003/2004.

Prof. Dr. Ben Ross Schneider
Schneider is Ford International Professor of Political Science at the Massachusetts Institute of Technology (MIT) in Cambridge, Massachusetts, USA. His research focuses on comparative political science, political economics and Latin American research. He is the author of "Hierarchical Capitalism in Latin America: Business, Labor, and the Challenges of Equitable Development" (2013) at Cambridge University Press and "Complementarities and Continuities in the Political Economy of Labor Markets in Latin America" (with Sebstian Karcher, 2010) in the Socio-Economic Review. Schneider has also advised various international organisations, including the World Bank, the Global Development Network and the United Nations Research Institute for Social Research (UNRISD). He was a Fellow of the Hanse-Wissenschaftskolleg in the academic year 2014/2015.

Prof. Dr. Kathleen Thelen
Thelen is Ford Professor of Political Science at the Massachusetts Institute of Technology (MIT) in Cambridge, Massachusetts, USA. Her research focuses on the emergence, development, and effects of institutional orders that produce different manifestations of capitalist economies, especially in affluent democracies. She is the author of "Varieties of Liberalization and the New Politics of Social Solidarity" at Cambridge University Press (2014) and of "Economic Regulation and Social Solidarity: Conceptual and Analytical Innovations in the Study of Advanced Capitalism" in the Socio-Economic Review (2010). Thelen is member of the American Academy of Arts and Sciences and of the Berlin-Brandenburg Academy of Sciences and Humanities. She was a Fellow of the Hanse-Wissenschaftskolleg in the academic year 2014/15 and visits Germany regularly for her research.

Prof. Dr. Nicola Yeates
Nicola Yeates is Professor of Social Policy in the Department of Social Policy and Criminology at The Open University, Milton Keynes (UK). She joined The Open University in 2005. Her research is focused on transnationalisation and globalisation as social processes, together with their impacts on, and implications for, social policy as a field of academic teaching and research and as a political practice of state and non-state actors. An on-going theme across her work is how social diversity, divisions and inequalities are constructed, manifested and contested through diverse trans-border social processes of policy formation. Yeates is the author/editor of many academic publications. Her books include "Globalizing Care Economies and Migrant Workers" (2009, Palgrave), "Globalization and Social Policy" (2001, Sage), "World-Regional Social Policy and Global Governance" (2010, with Deacon, Macovei and Van Langenhove), "Understanding Global Social Policy" (2nd edition, 2014, The Policy Press) and "The Global Social Policy Reader" (2009, with Chris Holden, The Policy Press). She is a former editor of the journal "Global Social Policy" (Sage).