News about Equality at CRC 1342

"Often you are too hard on yourself" 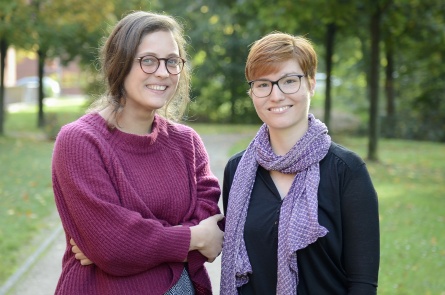 At the end of September, Saskia Schottelius offered her 2-day workshop "The Art of Self-Presenting for Female Scientists" at CRC 1342. Why did you decide to participate?

Kristin Noack: I was interested in the workshop because presentations are not my favorite situations. And I especially liked the fact that the course was specifically aimed at women who feel the same way.

Johanna Fischer: Presentations are an important part of our scientific work. I feel very comfortable in small groups, but sometimes I'm nervous in larger rooms where I don't know the exact audience. In this respect, I had the feeling that I could learn a lot in the workshop, or that I could certainly turn off things that had crept in.

What did the trainer do with you during the two days?

Fischer: At the beginning we concentrated on language and made sure to speak positively. For example, we did an exercise where we had to write down adjectives for each letter of the alphabet that could be applied positively to strong women. We reflected on this later in order to become aware of our strengths. Then we did many exercises for speaking. We had to present different things to our counterpart - e.g. about how to start consciously, or time management. Other topics were body language and voice exercises, especially how to find your voice.

Was that already specially designed for women?

Fischer: Not during the vocal exercises. But we also dealt with the Imposter Syndrome. According to surveys, female scientists and female leaders feel much more often and more strongly taht they are impostors, they do not assess their skills positively and tend to pay attention to deficits. Although nobody can be 100 percent perfect, women often perceive it in such a way that they still have to be perfect for their job. Men often think, "I can only do it 60 percent, but that's okay. That's what we've been talking about, including dominant speaking behaviour in groups.

Noack: On the second day almost every one of us gave a presentation. The audience had to pay attention to certain things and give feedback. And the feedback, it was agreed beforehand, should focus on the positive aspects, but still be serious and sincere. In a scientific context, you often focus on the negative things, and that of course promotes certain insecurities. In this respect, it was encouraging to get some positive things reflected about our way of presentation. On the second day we also did meditation exercises and some Tai Chi and Qigong.

Which of the contents were most beneficial to you? Which ones will you try to implement?

Fischer: The so-called Pre-Introduction was very helpful when it came to the structure of a presentation. In the beginning of a presentation the audience often doesn't listen at all, which is why a short introduction to the topic, e.g. with something rather general or an anecdote, can be helpful. I will try to include this in my next presentation.

Noack: We were a very mixed group: a few women from the SFB, but also some from marum and BIGSSS with different scientific foci. I found it very empowering to be in such a group. We were so very different scientists, but there are topics that concern us all. And being a good scientist can mean different things. What I am trying to do is to pay more attention to what is going well, because you are often too hard on yourself. The workshop gave me some ideas.

Did you also talk about differences between men and women?

Fischer: We talked about speaking behaviour. Many men think they have something to say in discussions and have to speak up, even if they are not experts on the subject themselves. But we also said that as women we do not necessarily want to copy that.

Noack: Most of the time it was not about reproducing stereotypes either, but about reflecting on ourselves and our behaviour. And to try out and practice certain things for ourselves. During the workshop the focus was on us as female scientists.